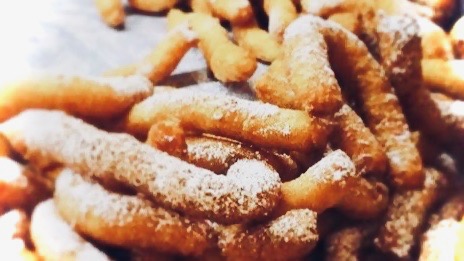 In Italy there are many recipes called “crispelle” or “zèppole”, and in Sicily there are some different versions of each other. In the Catania area and in Eastern Sicily in general,  the rice crispelle (sweet rice croquettes) are prepared in the Christmas holidays and in any case throughout the winter, but they meet the favor of the public especially during the Saint Joseph feast (on March 19, Father’s Day).

Like many other Sicilian sweets , this recipe can also represent an independent dish, since the crispelle are made from rice, flavored with orange zest, so much wildflower honey and a nice sprinkling of icing sugar!

I often propose this recipe in my cooking classes: it serves to understand the best frying techniques and to perfume the rooms of Cucina del sole with an unmistakable family smell and traditional parties. Many families still hurry to prepare them at home, but many others flock to the excellent fryers that are found throughout Eastern Sicily. Usually the crispelle are served in large plastic trays, hot and inundated with liquid honey.

Cook the rice in six dl of boiling, salted water, over very low fire, until the liquid is absorbed, stirring frequently.

Set aside, for about twelve hours.

Add the flour, the orange peel (about two tbsp.) and mix well.

Put it aside for about two hours, then moisten the rolling board and spread the rice on it (it should be about two cm thick).

Heat the olive oil in a small saucepan and fry the rice strips, a few at a time, until light golden.

Drain and put them on absorbent paper, to remove the excess oil.

Place the rice croquettes on a serving dish, sprinkle with hot honey and ground cinnamon and serve.

If you want to discover Sicilian, Mediterranean or Italian, traditional and more modern cuisine, come and visit me at Viagrande. My courses are in group or personalized. Contact me on  Facebook page, on Instagram or discover Cucina del Sole  website!